When canvassing potential recruits to work within our Mugspotters Empire one of the interview questions is: “Who is the best James Bond?” You don’t even have to explain why but if the answer is Sir Roger Moore, you’re through to the assessment centre. Such is the esteem with which we adore the JB franchise and in particular Sir Roger himself. For so long we’ve been aching to shoehorn some serious 007 action into this blog and this is the day, courtesy of CMACS.
There are so many parallels which you could draw on with 1977’s “The Spy Who Loved Me“, which has an aquatic theme courtesy of arch-villain Stromberg & his vision for an underwater city but today we are focusing  more on CMAC’s vital work here. If you peruse their website, it’s a wondrous insight into marine work you just simply take for granted and never believed existed, such as Krill Certification, Marine Mammal Management & Benthic Environmental Monitoring. As in the true tradition of Bond double-entendres, CMACS also partner the wonderfully named ‘Dong Energy’. (Ed – Don’t go there!)

But what of the mug that’s brought us here. The subject matter is so rich you’d be forgiven for overlooking it. At first glance it’s your common-or-garden Sparta but just marvel at its jutting lip! Almost Jaggeresque in stature, this benefits hot beverage consumption no end. And that brings us nicely to the Mugspotters drink of choice, Tea. Two sugars, stirred not shaken. 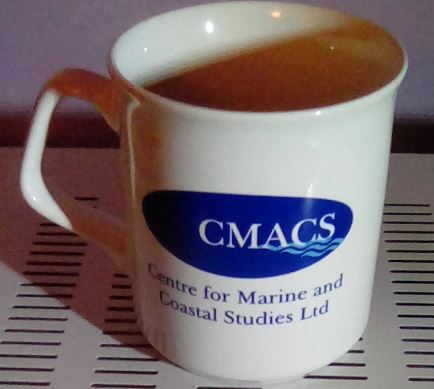 THE James Bond. Licenced To Kill.